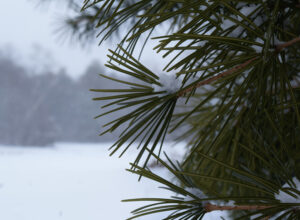 The heavy snowflakes gracefully fell from the sky but quickly dissipated into liquid the moment they touched my bright, orange jacket. The individual snowflakes that found their home on me were no match against the heat emanating from my body, but the ground beneath my feet was a different story. Most snowflakes swirled past my jacket full of energy almost as if they were squealing with glee as they rode the air towards the ground. They nestled and nuzzled with the other sparkles of light until they formed a blank, white sheet of snow, an almost perfect white. My brown, ragged pair of boots looked odd against the white of the snow, and yet my boot was accepted by the snow with each step that it took. The snow sank and creaked as I walked past the Japanese Umbrella Pine and into Deborah’s Garden. I wondered to myself what those creaks meant. Were the snowflakes all talking… were they trying to talk to me?

A fairy house next to the boardwalk covered in snow.    Image credit: Evan Foster

This thought was quick and fleeting as a loud groan came from a nearby tree. The wind whistled as it blew through the branches and rocked the large tree trunks. The trees complimented each other as the groans echoed throughout the forest. I soon found myself traversing on the snowy boardwalk that snaked through the wetlands. With snowflakes still falling all around me, I pushed forward along the path but something new was emerging: a flap and a chirp. It was an effortless note caught and replicated from one bird to another. My ears perked up with every chirp that came from the remaining few birds that stayed for the winter. 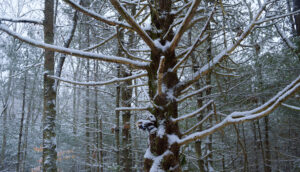 A snowy tree in the woods of Richardson Preserve.    Image credit: Evan Foster

I emerged from the forest past the final trees and into the lower hayfield where I saw the full display of the winter flurries. There was a white sheet in front of me that made it difficult to see to the other side. My head remained down to avoid the snow hitting my eyes and to keep my vulnerable face from getting too cold. I wondered to myself; how do the birds fly in this? I wondered if their instincts take over and guide them to where they feel they should be or if it was something else. I wished to myself that I could find the answers by simply asking the birds.

The field echoed and amplified the sounds around me, and I soon found myself caught in a chorus of a song. There was a choir out there: the chirps from the birds, the groans from the trees, the creaks from the snow and the squeals from the snowflakes. This song filled my head and carried me home with the answers that I had longed for.