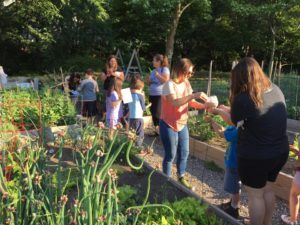 The Attleboro Community Garden, now in its 20th year, opened on April 7th. Although it was a cold and dreary day, about 30 gardeners took part in opening day activities that included cleaning the grounds and adding soil and compost to garden plots.  During the morning, gardeners also accepted a rest area and kiosk which were planned and built by Eagle Scout candidate Cameron Griswold.

Even with the unseasonably cool Spring, the Garden is starting to come to life.  On May 2, Attleboro Girl Scout Troop 4984 stopped by the Garden and gave gardeners garden buckets.  The Girl Scout troop took some of the proceeds they earned from cookie sales and made 60 garden buckets that they distributed to different organizations.  The buckets contained, garden gloves, tools, seeds and a decoration.

Upcoming activities at the Garden this year include a ladybug release, scheduled for June 22 at 5:30 pm; garden party and potluck lunch on June 23 from 10:30 am to 1 pm, and a 20th Anniversary Celebration tentatively scheduled for September 8th.